Coming Together While Cooking Live with

MICA Master's Thesis - UX Research, UX Design
Project Overview
The year is 2021. The divisiveness and disconnect between people and cultures at large have been worsening, and there is a desperate need for avenues to increase empathy and understanding between people on a large scale. Humans have gained empathy and understanding throughout history by sharing stories over meals and cooking.  In a time when people can’t come together and bond over a shared meal, what can we do?

OpenKitchen is a live streaming platform that seeks to provide a space for people to come together and experience recipes and culinary knowledge during a time when in-person experiences aren’t safely sustainable due to the COVID-19 pandemic. The platform is focused on both public and private live streams that have recipes and ingredient lists built into the interface- allowing an easily shared experience that can be savored forever.
Contributions
UX researcher & designer: Initial research, discovery, ideation, prototyping, user interviews, and user testing, iteration, high fidelity prototyping, analysis of feedback for prioritizing next steps.

‍Branding Director: Developing a strategy for the brand and deliverables along with the prototype. 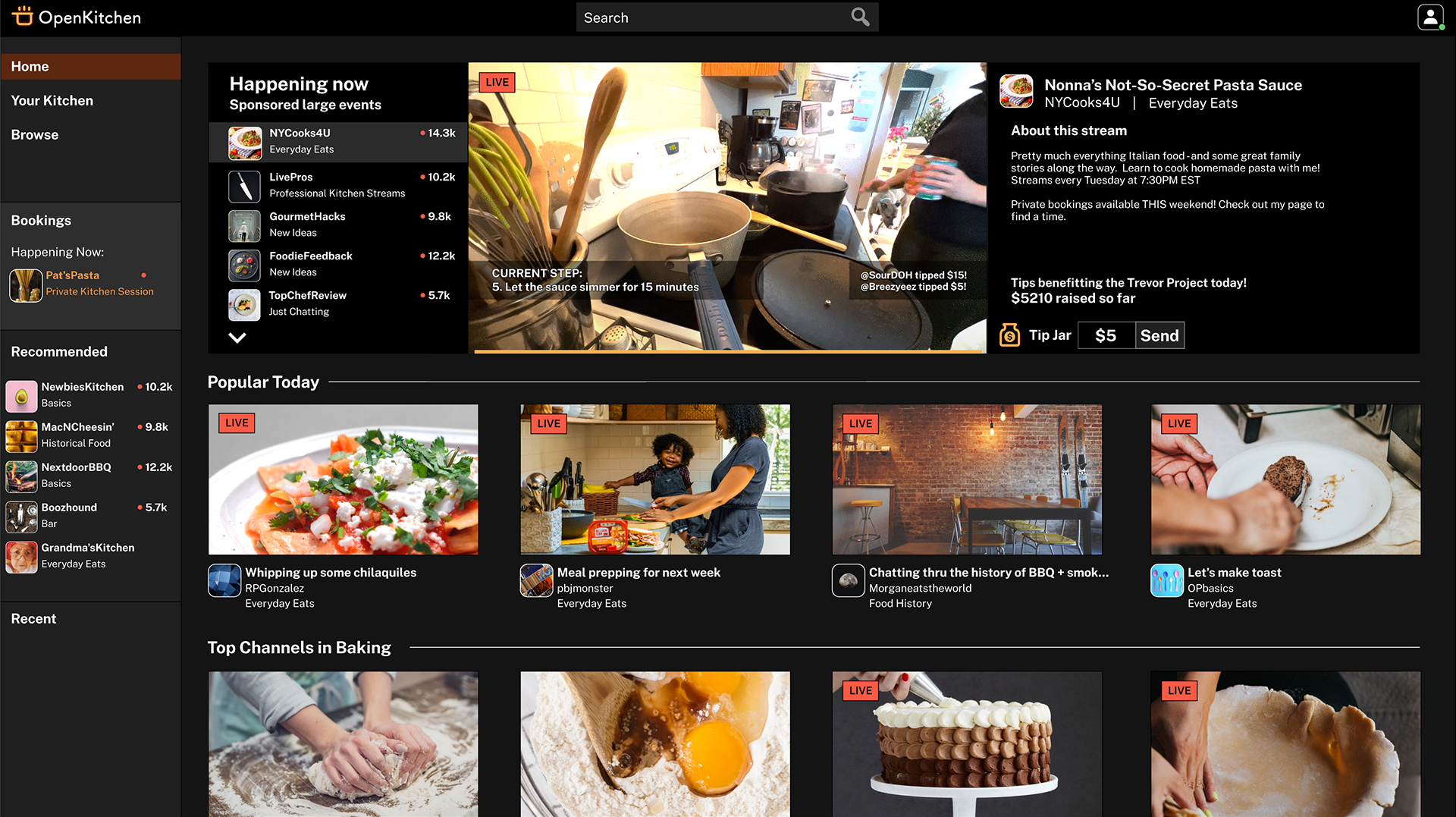 A still of the user's dashboard.

A video demo of the OpenKitchen prototype.

Sharing and preparing food together is one of the earliest ways that humans have bonded and shared stories, with an outcome of increased empathy and understanding between people. The culture and history of food are all around us, and could serve as an easy source for people to connect and relate to each other. Considering the impact of the global COVID-19 pandemic on in-person meal sharing orgs, my focus shifted to alternative ways for people to share their culinary knowledge and expertise.
‍
The problem statement I set out to tackle:
How might we enable people to come together while cooking when they can't directly meet in person safely in a sustainable way?

I researched several factors in building a business case and solution that would answer my problem statement: the devastating effect of the pandemic on the restaurant industry, a booming digital sharing economy while folks stay at home more often than usual, and the popularity of food content especially as more people are cooking at home and seeking new ideas and recipes.

The next step was to ideate and build up a prototype to get in front of some users.

Below, you can see a mind map I created to help define my problem space when I was considering in-person meal sharing solutions, as well as a few early ideation sketches of solution layouts. 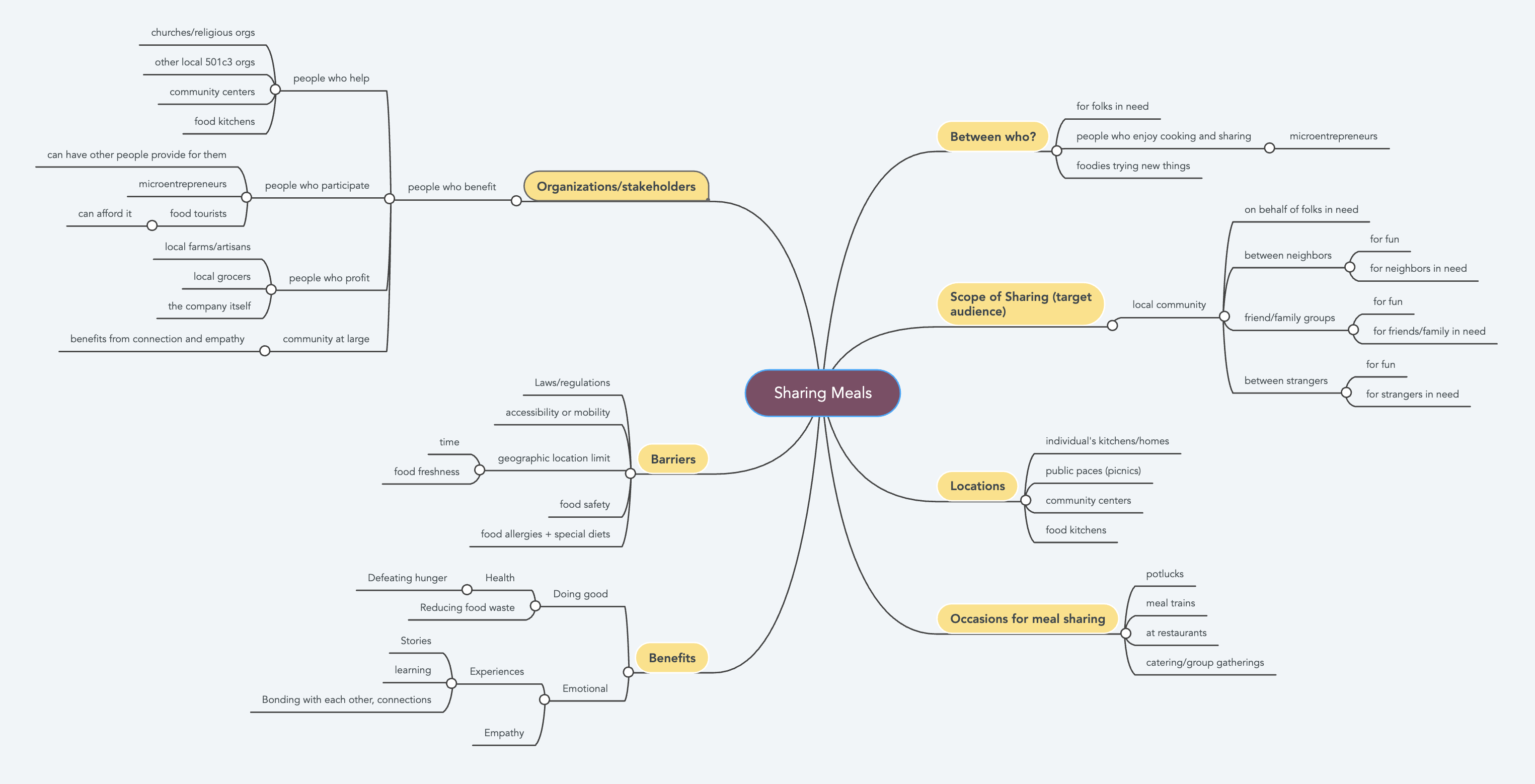 Mind mapping the initial problem space- what are the factors involved in sharing a meal with others - what are the influences and obstacles?

Speed sketches of potential layouts for a digital recipe sharing application on desktop and mobile screens.

I began wireframing the solution in Figma shortly after sketching out layout ideas - I needed to work quickly to build a convincing prototype to get into user testing as soon as possible. The images below illustrate a quick transition to a branded, content-filled prototype.
Ideation & Iteration into Early Prototyping
Building a Recipe 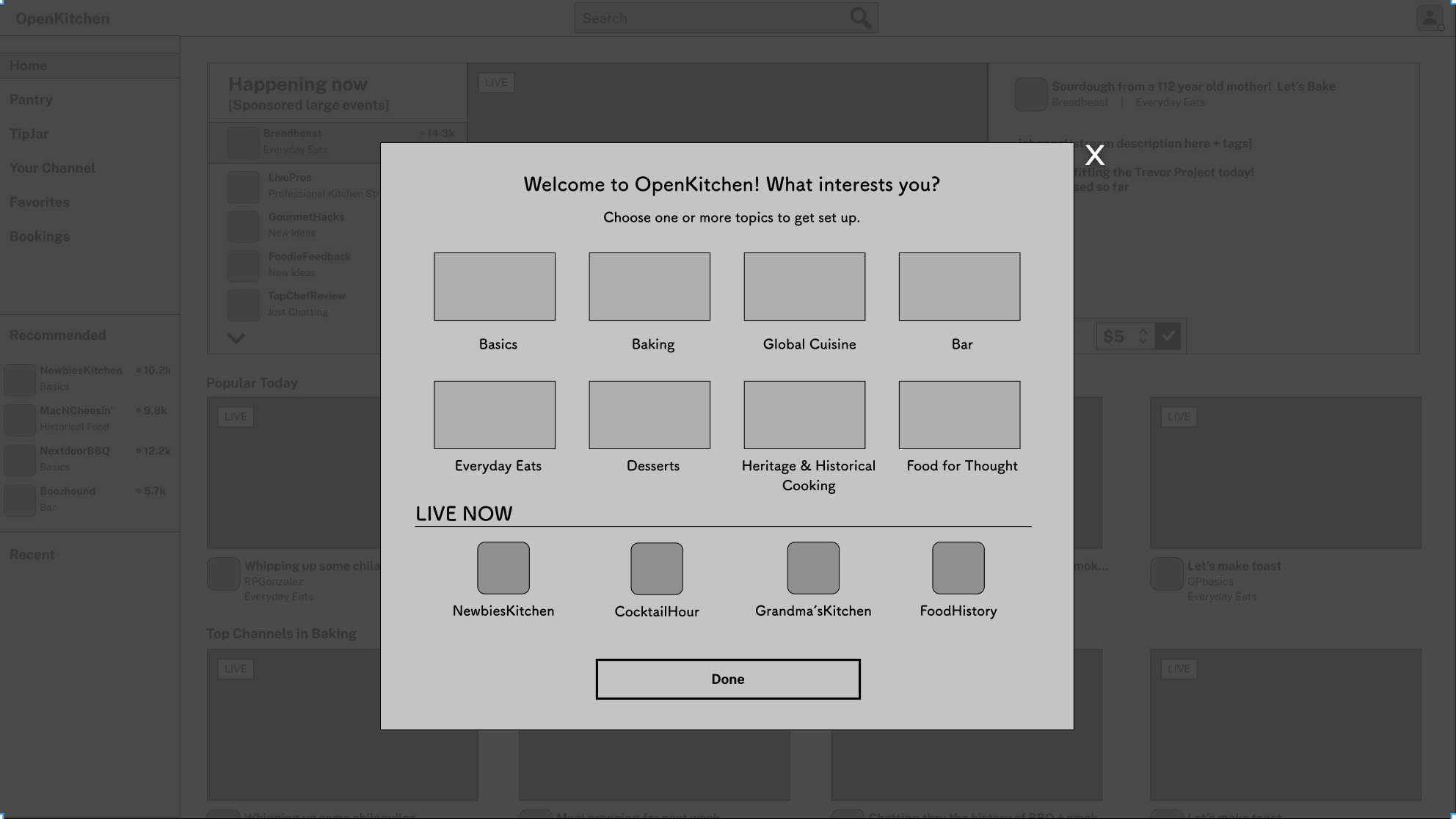 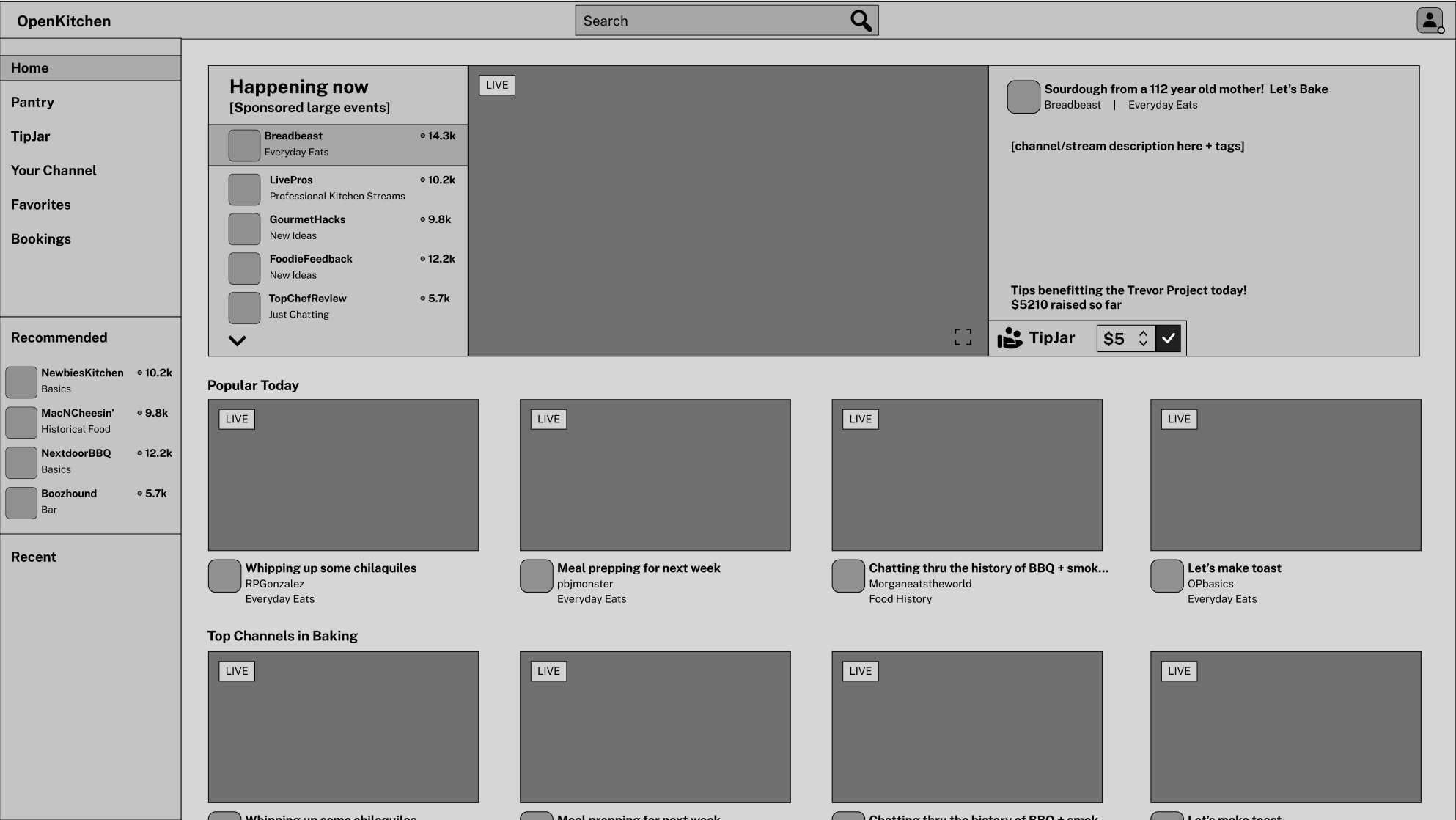 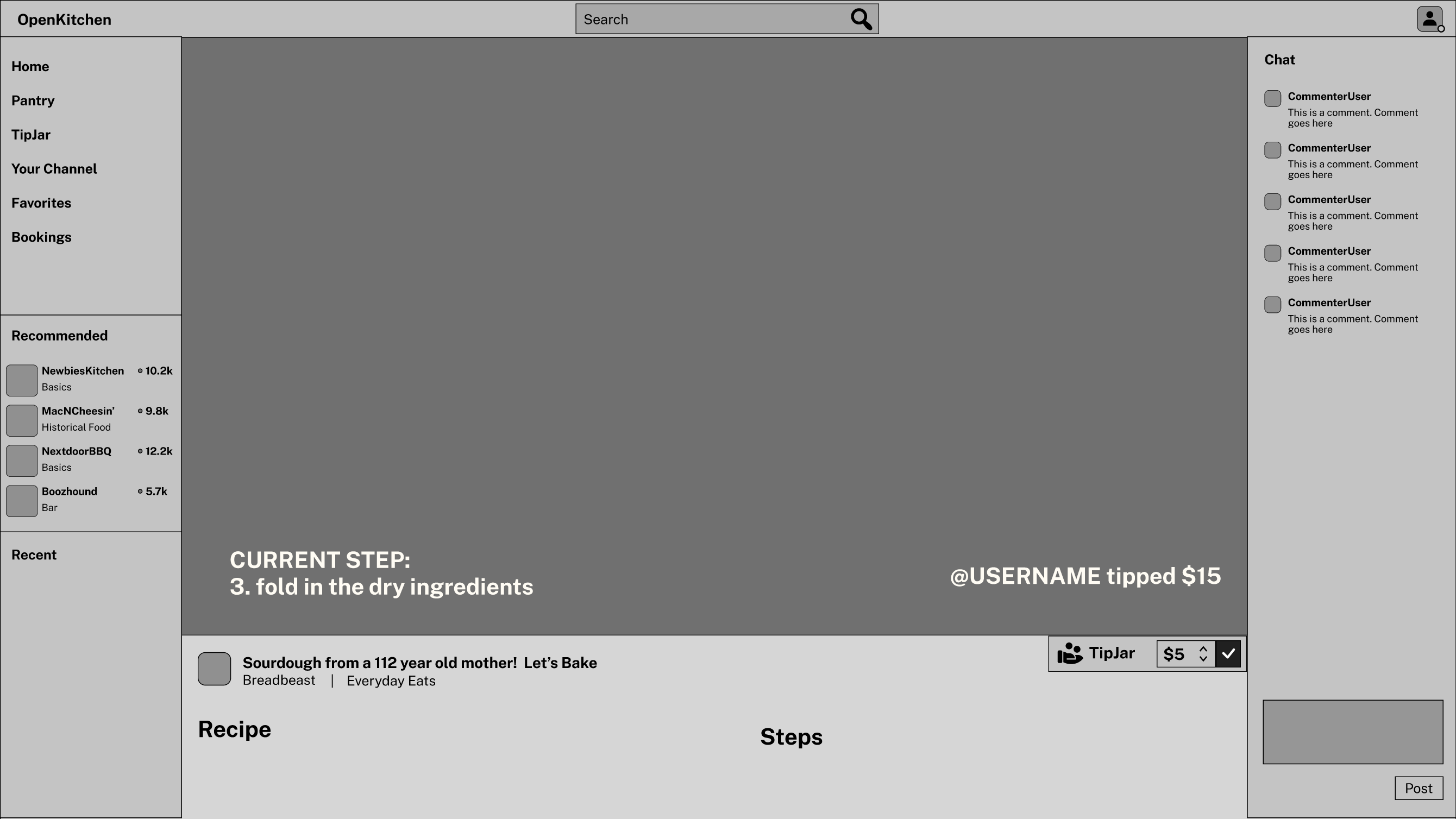 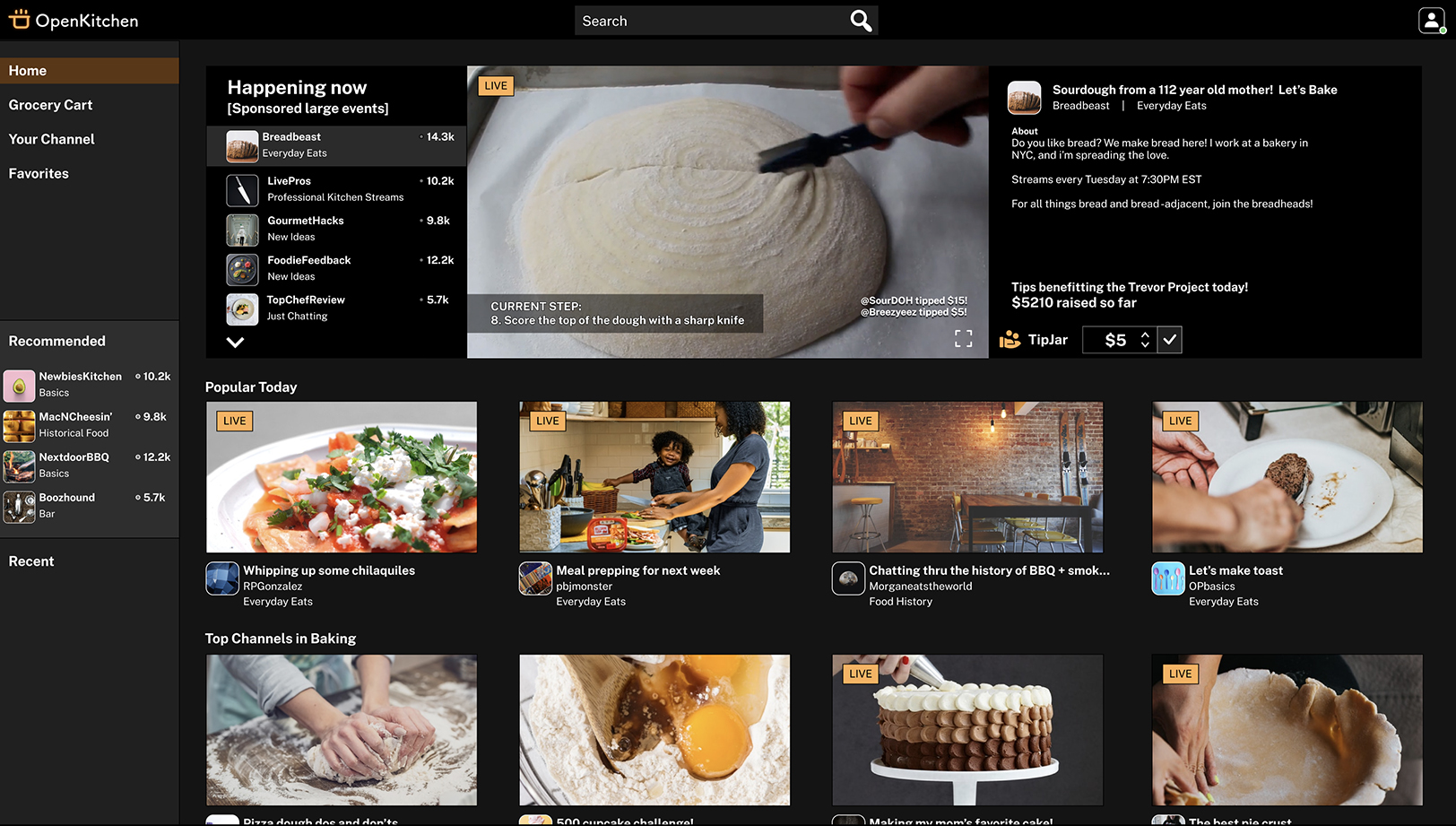 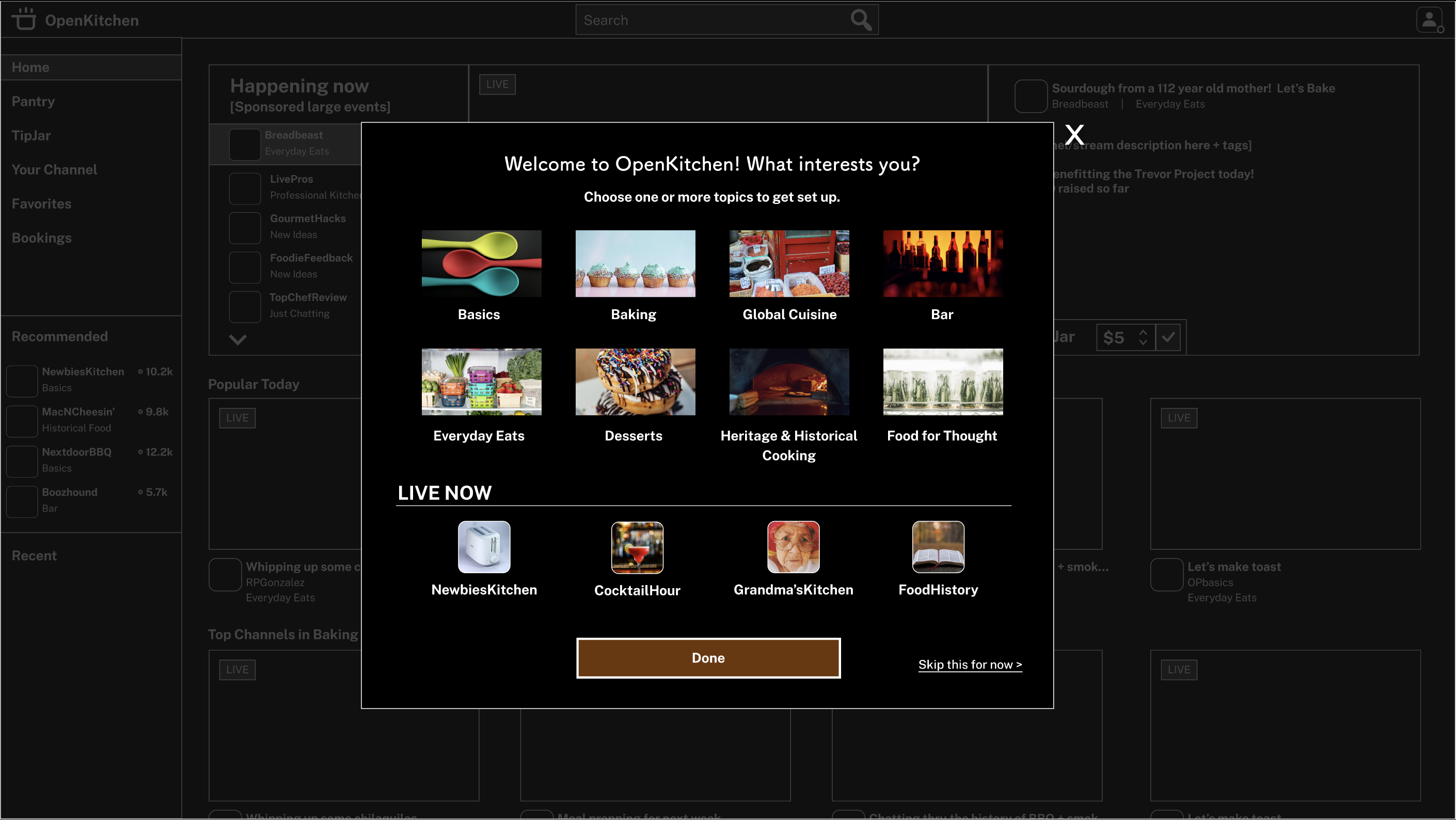 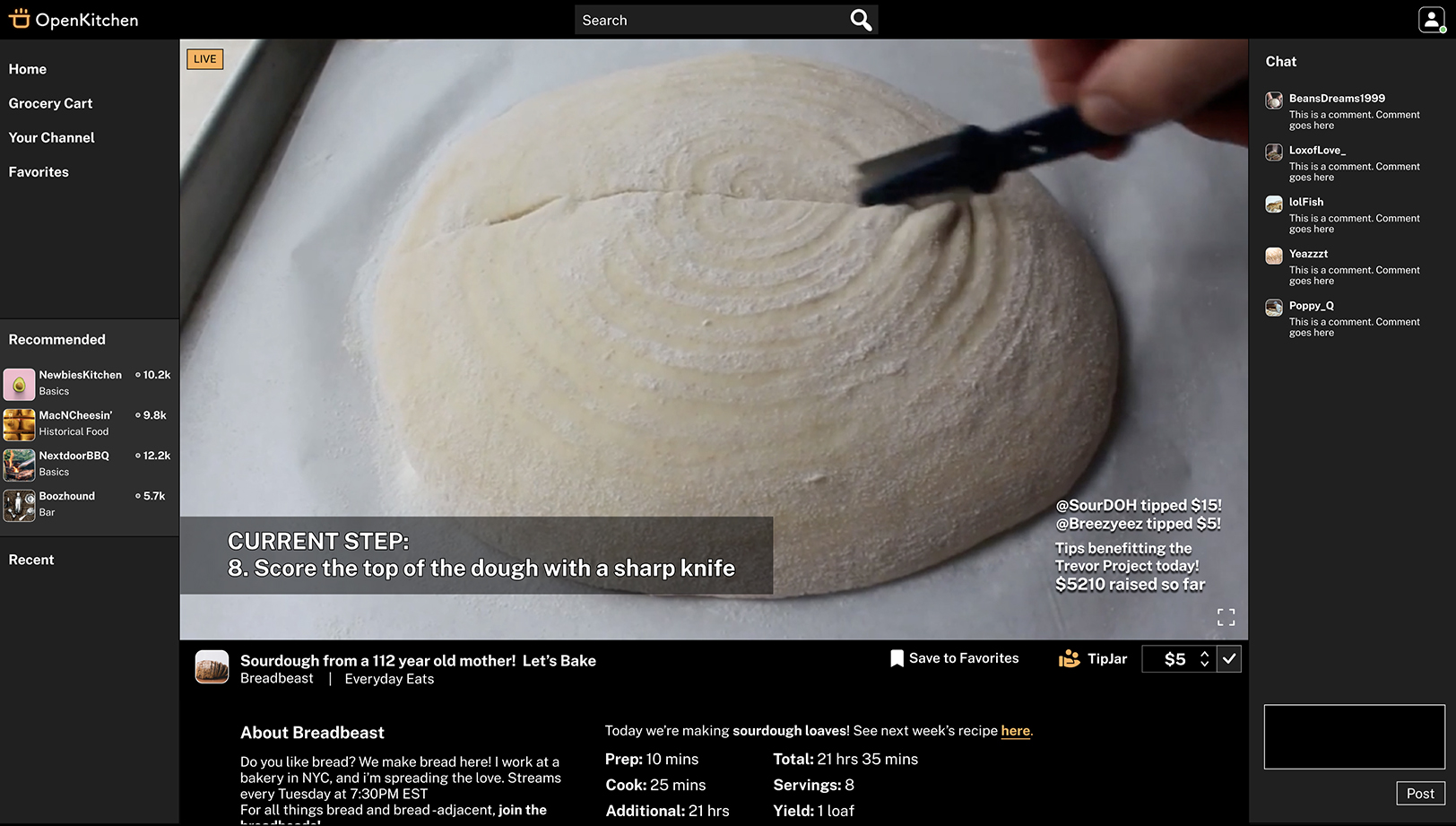 The progression from low fidelity to high fidelity prototyping in Figma.

I started reaching out to potential users by creating a mixed-method (qualitative and quantitative) survey that would help me gauge their habits around food-related content, following recipes, and buying ingredients online. Out of the survey respondents, potential users were selected to test the prototype, being asked complete a few simple tasks. I created an affinity map to help gather and prioritize my next iteration phase (below, left), and started adjusting my interfaces to help meet user needs (right).
User Testing
Making Tweaks to Taste 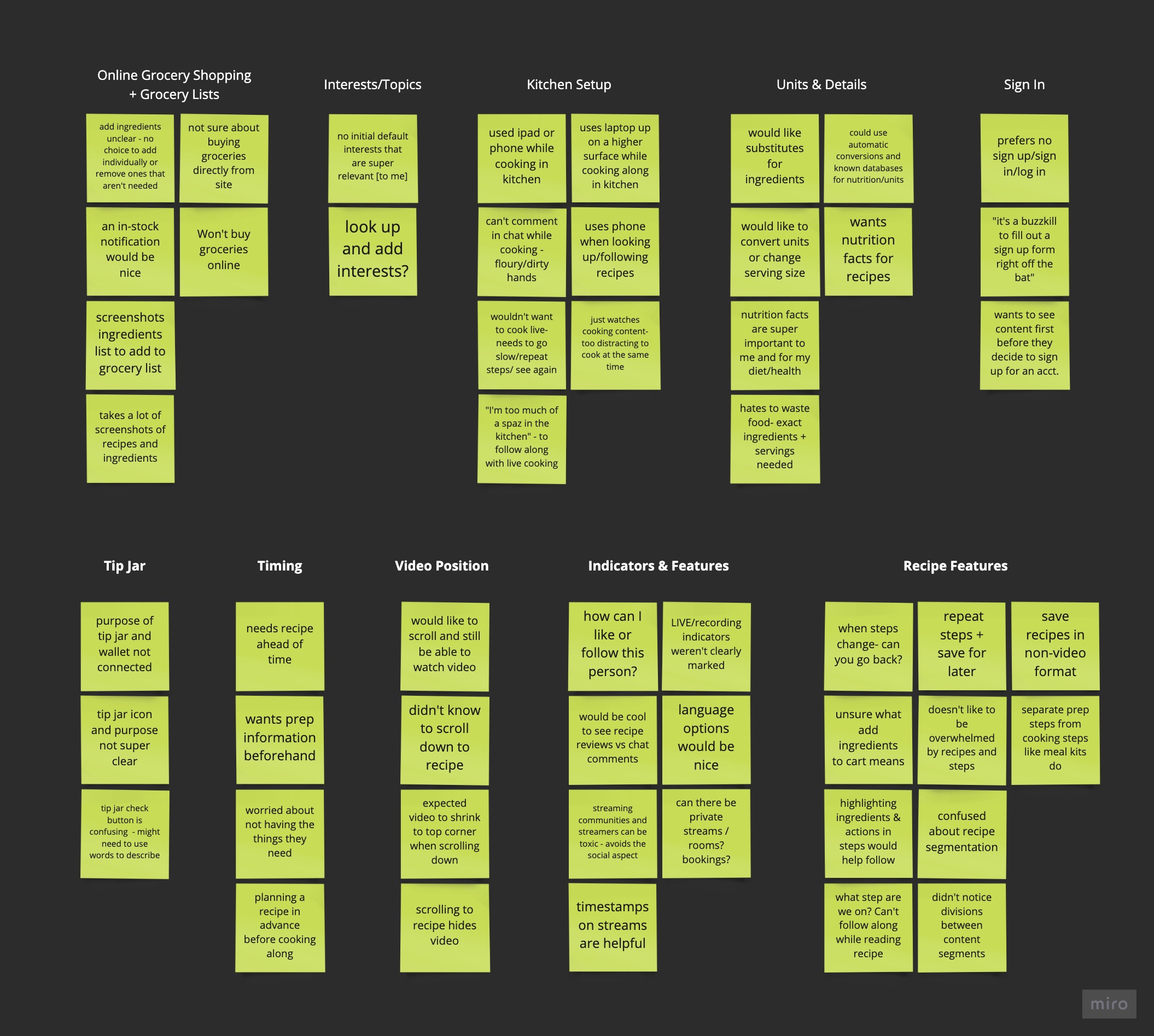 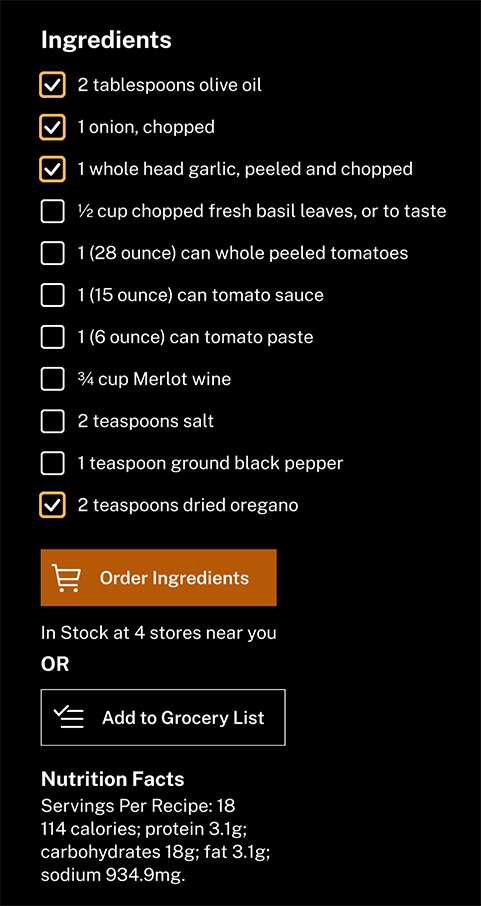 An affinity map created from user feedback during interviews and prototype testing, next to some examples of adjustments made to the recipe interface.

I adjusted features in my prototype to fit user needs after creating personas from the main themes that I found in my user testing. Users had a lot of input on recipe features, and how they would utilize recipe videos live and after streams were over. I noticed a divide between wanting to cook along with streamers live and just watch the streams for entertainment while saving the recipes and videos to watch later. I also noticed a divide between buying groceries online via OpenKitchen, and wanting to save the ingredients to a list to take to the grocery store in person. Building features based on user persona needs enabled me to consider multiple uses for OpenKitchen beyond just sharing recipes in a live stream format.

OpenKitchen has now become a tool for users to:
‍
• Share recipes and the stories behind them, live
• Save recipe streams for later, with step markers linked in the video timeline - and in the written steps below the video
• Have private "kitchens" where anybody can start a live stream and share it privately
• Have bookings available for private sessions or even classes
• UI options for users who are cooking along and have messy hands
• UI options for users who want to save lists or steps to their phones 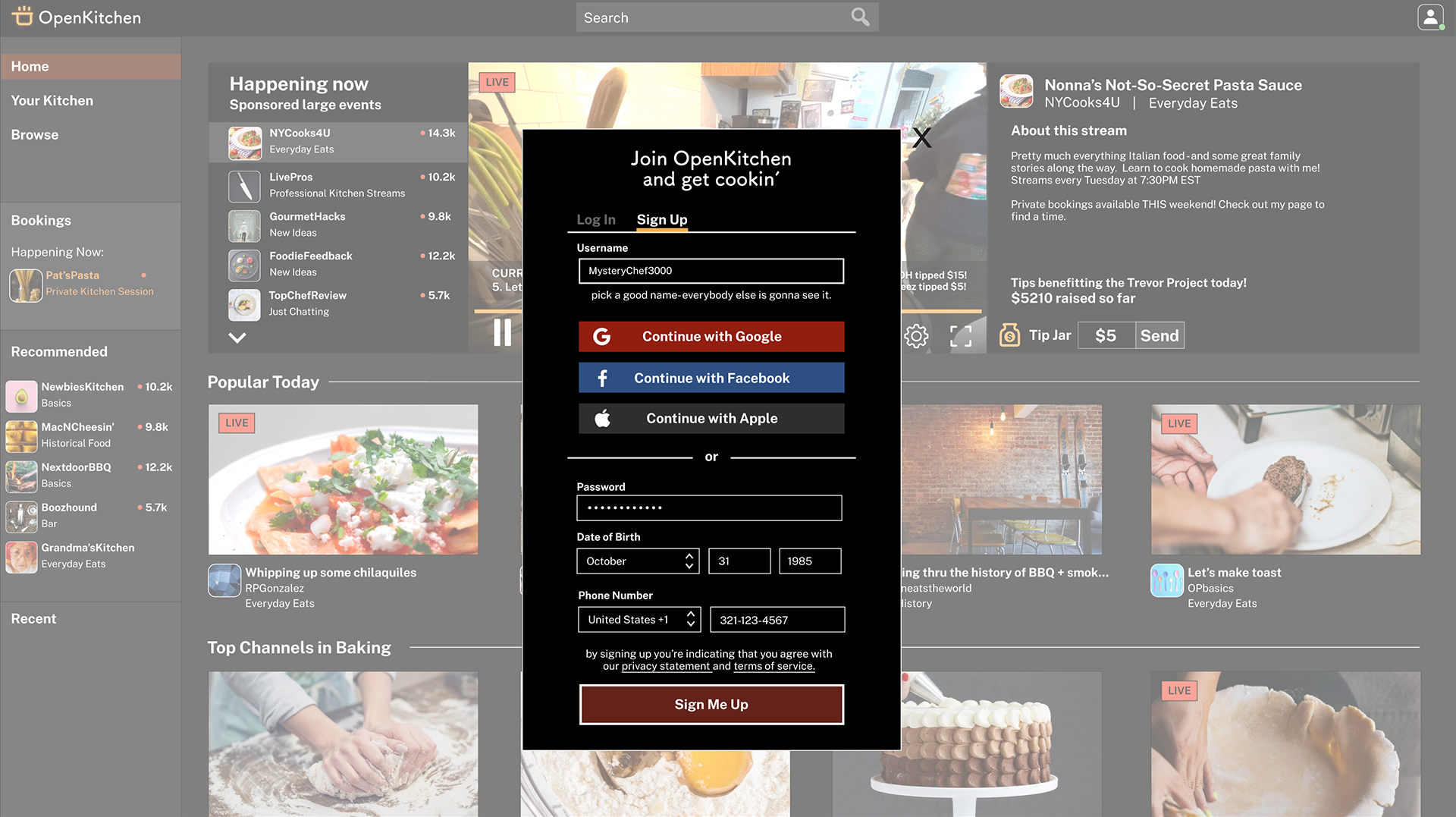 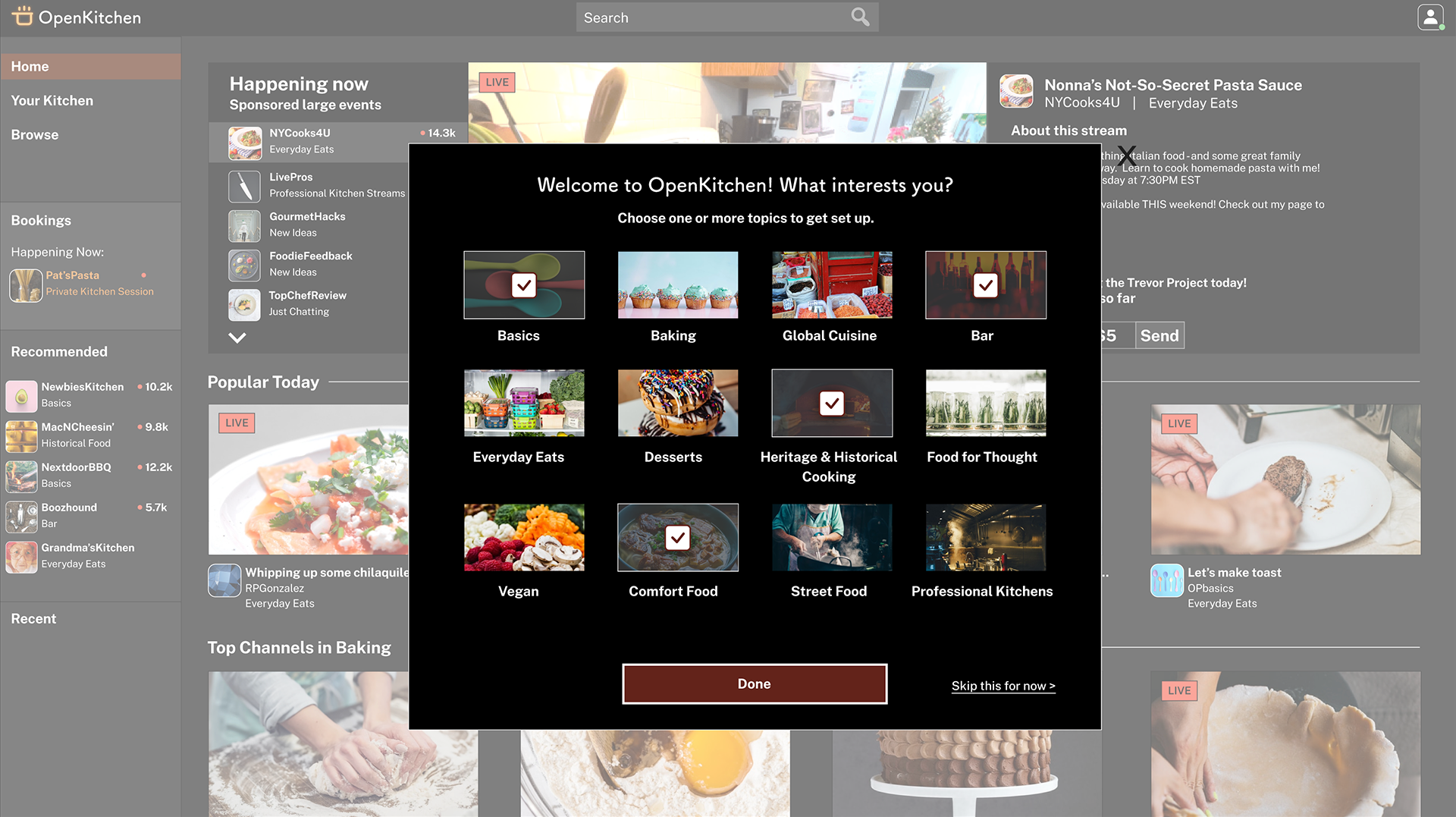 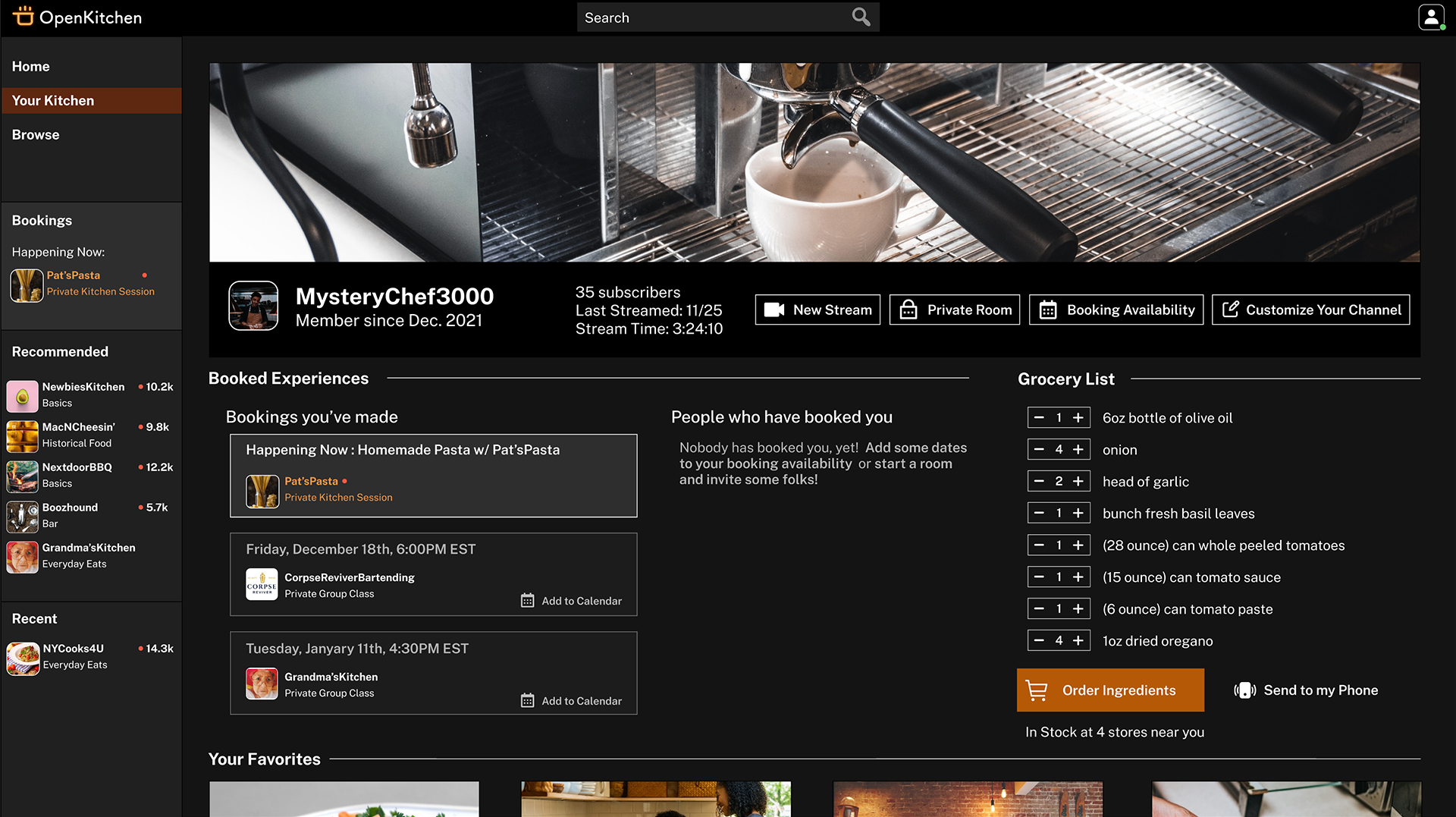 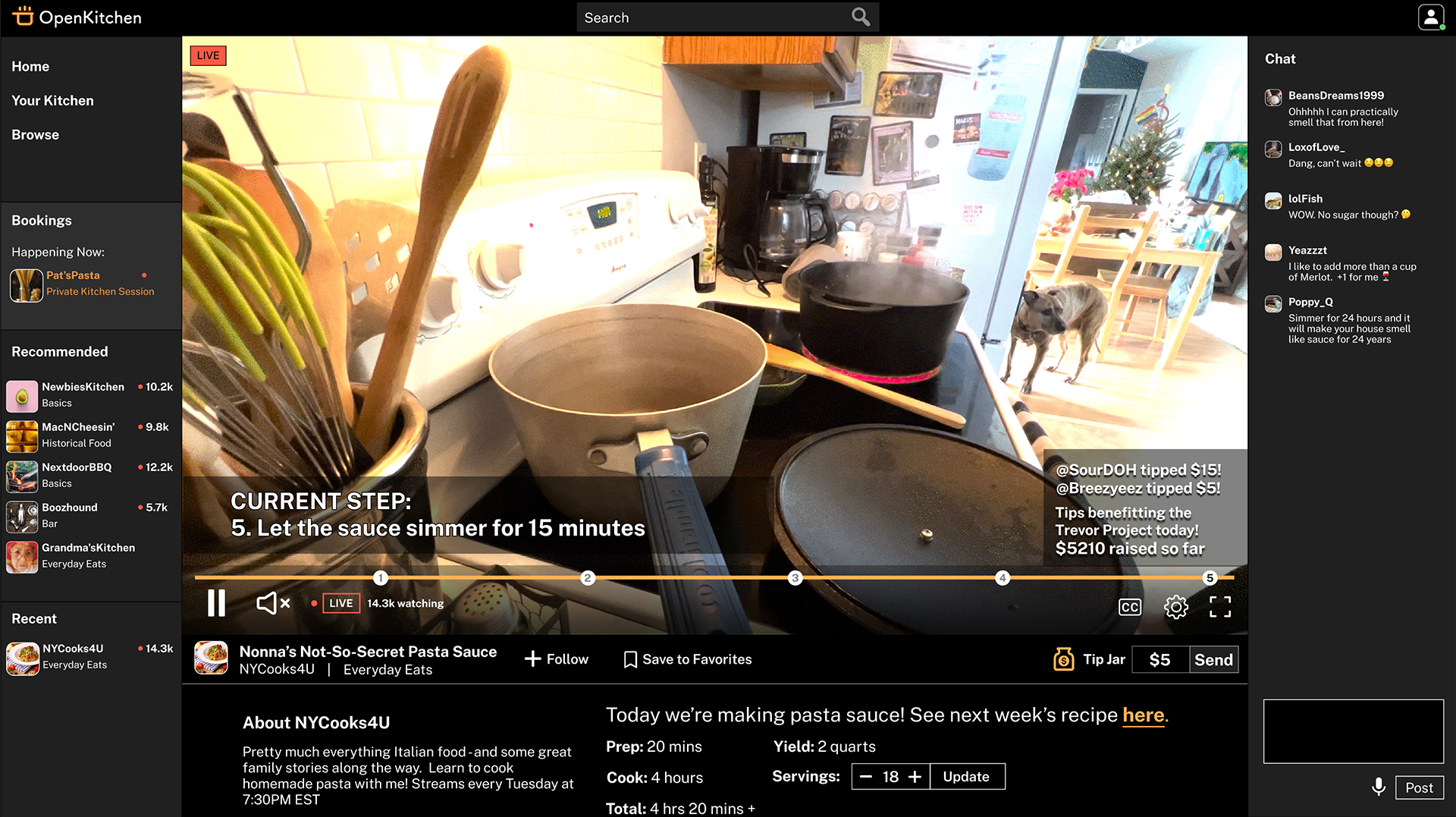 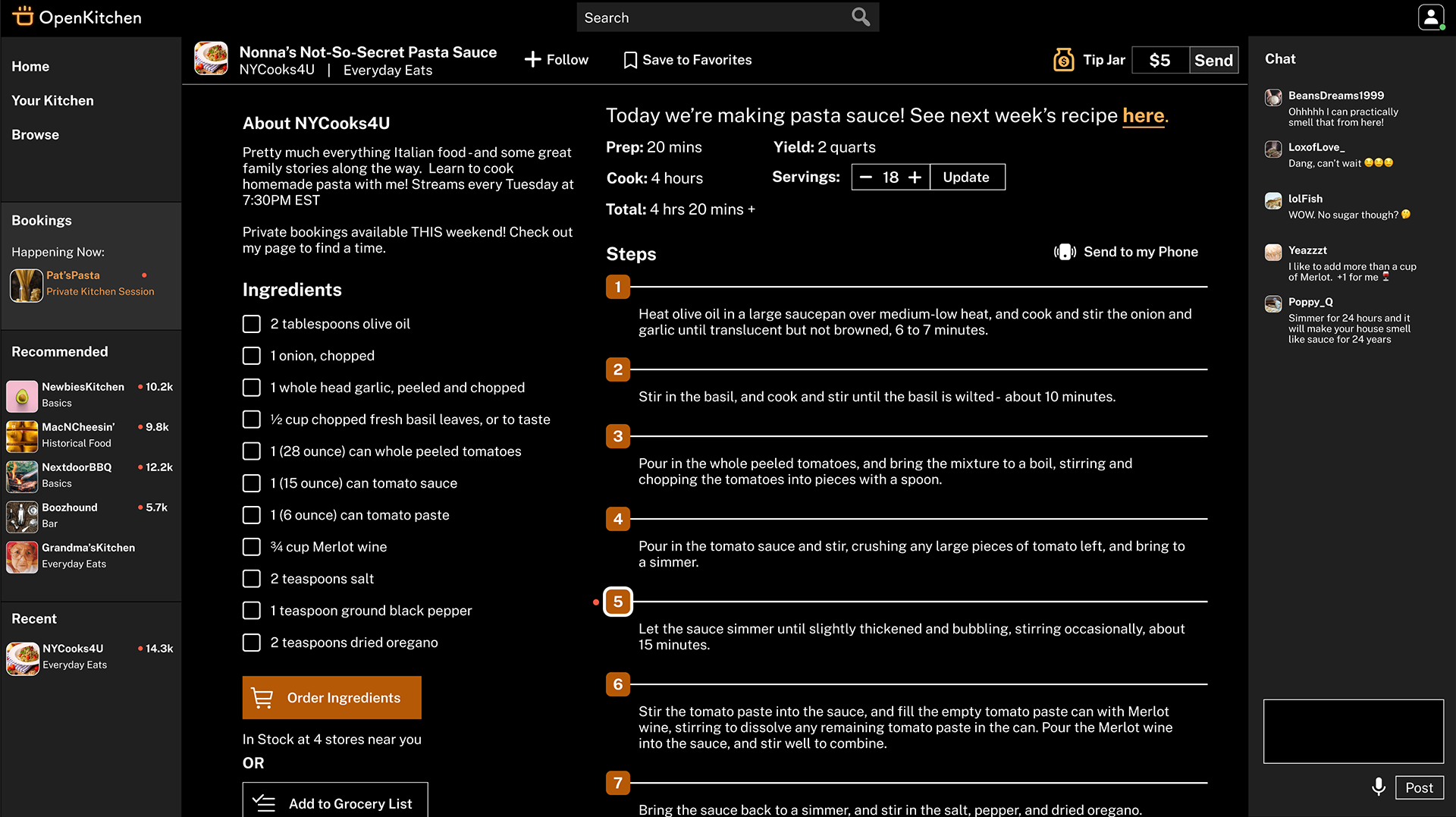 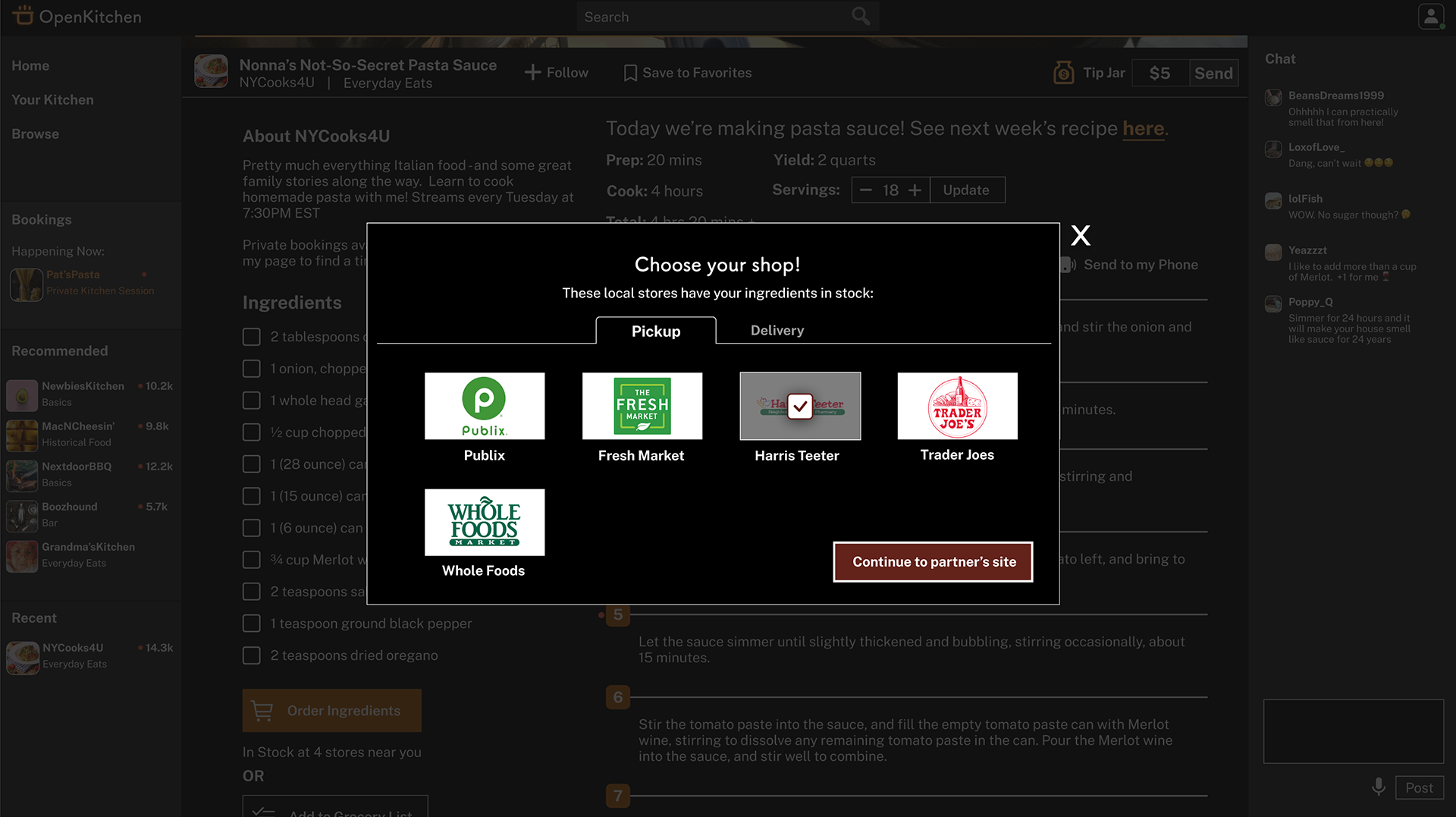 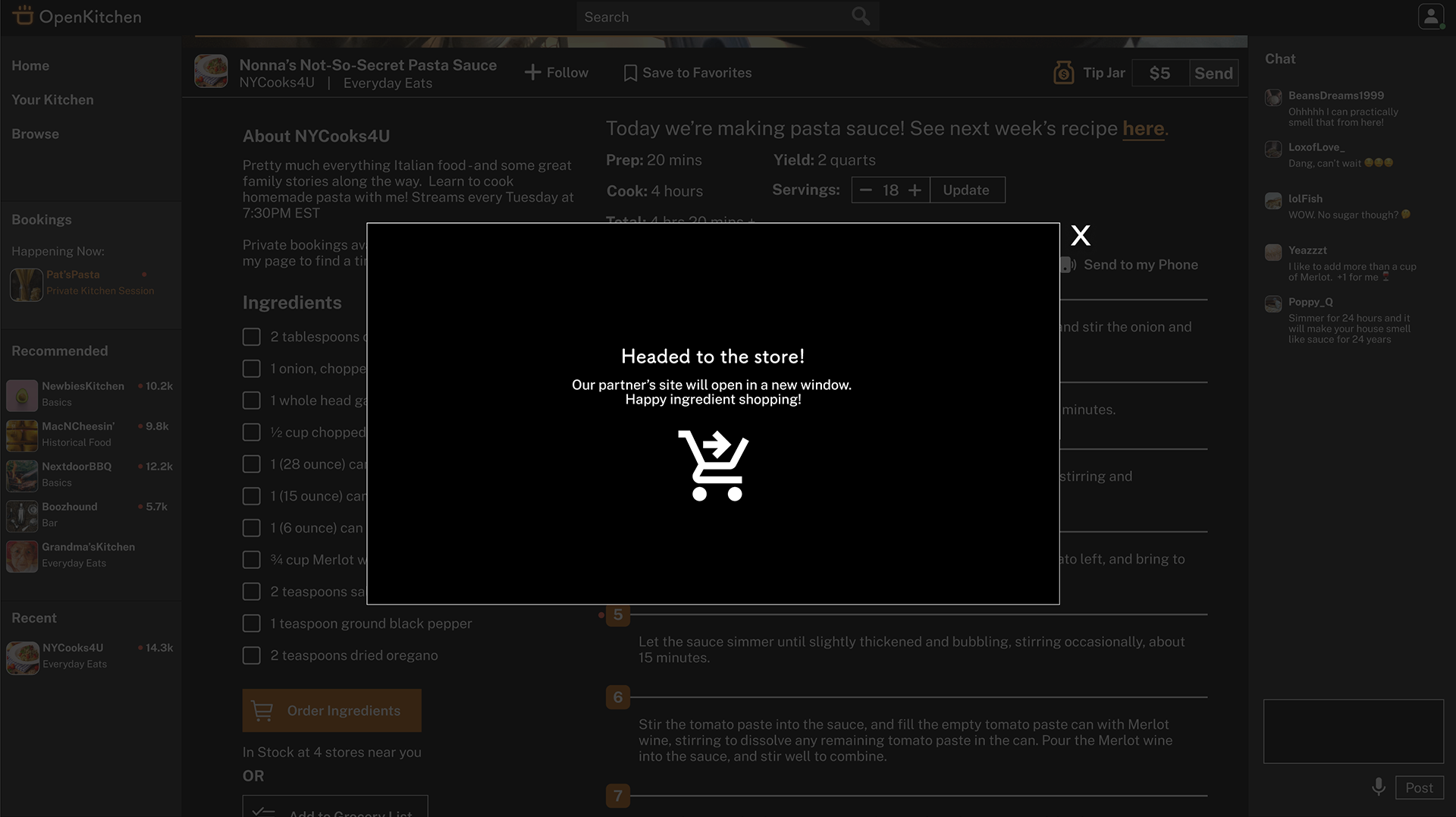 High fidelity prototype screens highlighting 1+2) the sign up experience, 3) the personalized main page, 4) the user's home page and dashboard,
5+6) a public stream page and the recipe below it, and 7+8) some of the grocery ordering experience.